Dear Eartha, Last weekend in Breckenridge, I saw people playing music in the Blue River. I heard the performance had something to do with water conservation – do you know what was going on?

It was such a delight to happen upon three incredible musicians performing right in the middle of Blue River last weekend. That’s right, they were playing their instruments – cello, violin and mandolin – while standing in the river, and I happened to catch a lunchtime show as I was settling in for a picnic on the Riverwalk Center lawn.

Tree-o Takes to the River

The musicians you heard were cellist Russick Smith, violinist Karen Lauffer and mandolinist Kevin Larkin, together known as Tree-o. Typically, they perform in the forest, seated on platforms mounted high in the trees. This year, the group moved to the river to maintain physical distance, and performances were part of Breckenridge Creative Arts’ Summer ArtScape. The new venue gave more space for masked attendees and it opened the door for a timely discussion on drought.

Also unique to this year, Tree-o included a fourth guest performer, the Blue River itself. Tree-o incorporated what founder Russick Smith calls a water harp. As water flowed over and past the strings, attendees heard a tone that changed with flow of the river. Even better? Tree-o improvised to the sounds of the Blue River, meaning no two performances were the same.

Water connects us all – and there’s less of it

So, what’s the conservation connection? As I listened to each song, I couldn’t help but wonder how the river’s music might change with more water, faster currents, and of course, the “yikes” scenario we have already entered: less water in our rivers.

Over the last 100 years, the average annual flow of the Colorado River has dropped 19 percent compared to the previous century. Several studies identify drought and warming temperatures as culprits. This spring, two U.S. Geological Survey researchers dug deeper. They studied how the effects of drought and warming temperatures – earlier snowmelt and increased evaporation – impact water loss in the Colorado River. They estimate that the river will lose 31 percent of its water by 2050, a conclusion in line with other studies.

Knowing our state’s snowpack is already melting two to four weeks sooner than in the past, the weekend’s performances got me thinking bigger. After all, the Blue River feeds into the Colorado River. And the Colorado provides water for nearly 40 million people. It irrigates 5.5 million acres of farmland and provides water to numerous tribes, National Parks and Wildlife Refuges, and to people and farms in Mexico.

The basic math of increasing demand and dwindling supply tells us that we can’t keep using water the same way. And yet, solutions are complex. As officials at the federal, state and regional levels navigate the next steps – which are needed no later than 2026 when the current Drought Contingency Plan expires – local governments, water providers and the High Country Conservation Center (HC3) are working on solutions.

In 2017 and 2018, four of the county’s largest water providers and HC3 developed state-approved water efficiency plans. Now, in 2020, each provider is tackling their own unique water challenges while HC3 offers programs to help locals save water in their homes.

Some communities are upgrading infrastructure to save water and energy, others are making new buildings more water efficient than ever, and still more are teaching residents how to save water through sprinkler check-ups.

As I sit here and reflect on the state of my own yard – gone dormant except for the veggie garden – I can’t help but think of the river and the drought facing all of Colorado. I’m choosing to remain inspired by my own experiences on the water, from musical performances in the Blue, to standup paddle boarding on the Upper Colorado.

Yet, inspiration isn’t enough. I vote in every election, big and small. I know how easy it is to find legislators’ contact information (by zip code on leg.colorado.gov) or email my town council about environmental priorities. After all, environment is central to the future of our mountain community. Will you speak up, too? 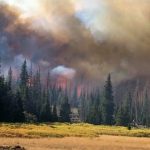