Dear Eartha, I know wildfires are a normal part of our mountain ecosystem, but I can’t help but wonder if climate change is making fires worse. Is it?

As I write these words, I am breathing a sigh of relief – for the first time in several days, I can clearly see the mountains outside my windows, the air doesn’t smell like campfire, and my eyes aren’t burning. Yet, the wildfires responsible for the plumes of smoke are still raging. And once the wind switches direction, the smoke will be back, and so will the reminder that we live in a tinderbox.

There are four major wildfires currently burning in Colorado. The Pine Gulch fire is now the second largest fire in Colorado’s history. And Grizzly Creek fire is the largest recorded fire in the White River National Forest. Obviously climate change didn’t start the fires, but plenty of research shows that it does make wildfires worse. Here’s how.

It’s getting hot (and dry) out here

Wildfire risk and severity depend on several intersecting factors, two of which are directly influenced by climate change: warmer temperatures and drier vegetation.

Published in 2018, the U.S.’ Fourth National Climate Assessment reports that the entire Southwest is heating up, and fast.  Colorado’s average annual temperature has risen 2 degrees Fahrenheit in just the last 30 years. Have you noticed this week’s forecast? With highs in the low 80s, we’re officially in record setting territory. After all, the record high for August 16 was 83 degrees, set in 1962.

But what does air temperature have to do with fire? In a word: dryness. Warming temperatures mean that springtime in the Rockies comes earlier these days. Snow is now melting 2 – 4 weeks earlier than in the past, causing soils to dry out sooner and stay dry longer. And less water in the ground means less moisture for plants to drink. In addition, warmer air speeds evaporation, further parching vegetation. You know what burns really well? Dry plants and trees.

Of course, drought exacerbates the dryness. I’ve talked to a lot of people who say that July felt like a rainy month. Truth is, western Colorado – including Summit County – experienced below average precipitation in July. Now, the entire state is in varying stages of drought. Perhaps no surprise at this point, climate change makes prolonged drought more likely, too.

So even though climate change doesn’t cause wildfire, it creates prime burning conditions. And what have we actually observed? Since the 70s and 80s, the frequency of large wildfires has increased across the U.S., as has the amount of acreage these fires burn. In fact, the 10 largest fires in Colorado’s recorded history have all occurred since 2002. And because of warming temperatures, the average fire season in the west is now 105 days longer than it was in the 1970s. 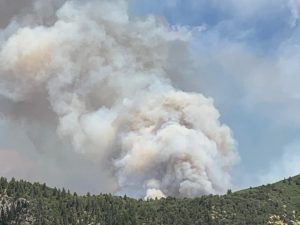 A curious thing happened last week. In between text alerts about wearing a mask in public, there was one that warned of unhealthy air quality in the county. Real-time air quality monitors warned that exposure to outdoor air for 24 hours could cause negative health effects, especially for people sensitive to air pollution (like asthmatics, children, and the elderly). Of particular concern is what’s called PM 2.5. This refers to particulate matter that’s made up of super small, super fine particles of dust and soot. Short-term exposure causes irritation like coughing, sneezing, runny nose, or shortness of breath. Long-term exposure can lead to heart disease and cancer, which is why chronic air pollution is a big deal.

We’re in the height of wildfire season, but the increased fire danger isn’t limited to the American west – it’s global. Even in Siberia, an unusually hot summer is fueling fires north of the Arctic circle, releasing millions of tons of carbon stored in the soil.

Wildfire is an important part of ecosystem health, and it’s naïve to think we can completely eliminate the threat it poses to our communities. But fighting climate change will help to decrease the risk of severe wildfire as well as minimize all the other negative impacts of a changing climate. What to do? Call your representatives – from the local to national levels – and urge them to implement comprehensive climate policy now. 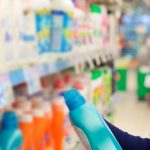 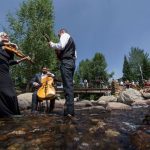